D vs. E on Your Approved Scale – What Do They Mean?

You know that your business requires a trade-approved scale and when shopping around, you see references to “d” and “e” readings. In this blog post, we’ll take a look at both readings, discuss what they mean and help you learn how those values apply to your legal-for-trade weighing device.

What is an Approved Scale?

We’ve covered trade-approved scales before in our Quick Guide to Trade Approved Scales and Balances blog. Trade-approved – also called legal-for-trade – essentially means that the weighing device was tested and meets the standards of the regulatory body that oversees the requirements of your location (i.e., NTEP in the U.S., Measurement Canada in Canada and CE in Europe) or industry. Meeting those standards offers assurance to buyers and sellers alike that the customer gets what they’re paying for, which is always important but even more critical when it comes to products with a high cost per ounce or gram like gemstones, precious metals or botanicals.

In the U.S., scales that are approved for trade typically are Class II or Class III. The legal cannabis industry requires the use of Class II scales (which display results from 1mg to 50mg and have 10,000 to 100,000 divisions, or better), while food weighing and postal scales are often Class III (1,000 to 10,000 divisions).

The “d” value, according to the U.S. National Institute of Standards and Technology (NIST) Handbook 44, is a scale’s smallest standard displayed division. That value is equivalent to a non-approved scale’s readability.

As an example, for Adam’s HCB 103aM (one of our Highland approved precision balances), the “d” value would be 0.001g because that model weighs in increments of 0.001g, as shown on its display screen.

While it would be used for most applications, the “d” value, however, isn’t used for trade purposes. That’s where the “e” value comes in. 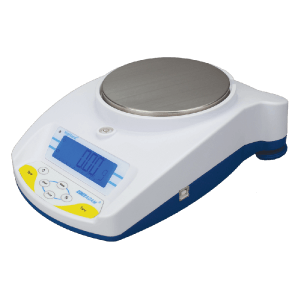 The “e” value is the verification scale interval, which means the smallest scale increment that can be used to determine price by weight in commercial transactions. That value – which will vary by scale model, depending on that particular model’s specifications – is determined by the scale manufacturer when submitting a device for type approval such as NTEP in the US, CE in Europe, NRCS in South Africa, NMI in Australia and OIML in France.

"e” is the stated accuracy (or certified reliability) of a scale when the scale display has extra units added in order to expand the resolution.

So Which Value Do I Need?

If you’re using the weighing results to set a price by weight, you need to use the “e” value. That value is the resolution that a legal-for-trade scale has been certified to weigh.

That’s not to suggest that the “d” value isn’t accurate, but it does mean that it isn’t certified to be accurate at the resolution necessary for setting a sales price. Trade-approved scales and balances undergo more rigorous testing to ensure accuracy and fairness to both buyers and sellers.

The National Conference on Weights & Measure (NCWM) operates the NTEP Certificates of Conformance Database Search, which allows users to search NTEP certifications of scales by data including certificate number, scale manufacturer or model number. The certificates feature an approval table that displays the “d” and “e” values for each device in a range.

For more information about Adam’s legal-for-trade offerings and to see which is right for you, contact us!