Which Type Display Screen is Right for Me?

Touch screens have become very popular over the past few years and for good reason: they can reduce the number of physical buttons needed on a device and provide clearer, more intuitive options for navigation. With smart phones being so pervasive, most people tend to be more comfortable with touch screens. So what exactly are touch screens?

As the name tells you, touch screens operate by touch. The actual screen is covered by a glass panel, which is in turn covered by a transparent electrode layer with a thin protective layer on top of that. Sensors in the electrode layer detect changes in electrical charges, which are transferred from the user’s finger or a stylus to the screen.

The two types, as we discussed in a previous blog post, are resistive (which require pressure to work) and capacitive. Adam uses capacitive touch screens – which are more durable since they operate without the need for the user to apply pressure, as well as offering clearer images – for our Equinox semi-micro, analytical and precision balances.

With a complex balance like Equinox, which offers a wide variety of applications and features, a touch screen makes the device much easier to use with a combination of icons and menu-driven navigation that are selected on the display itself without pushing buttons on a panel.

High-resolution graphic displays, like the ones used for Solis semi-micro, analytical and precision balances, offer navigation options similar to touch screens. The display is dot matrix, which allows for more easily readable fonts than with an LCD screen, where the characters are more crudely rendered.

While lacking icons, graphic displays can provide easy-to-use, menu-driven operation. For example, Solis features menus that the user may easily scroll through and select using the CAL and MENU buttons on the instrument panel.

Since the use of gloves in a lab can make it harder to use a touch screen (they interfere with the transfer of electrical charge from a finger or stylus), one of the advantages of a graphic display is that it can convey more complex details while offering easy-to-use navigation via buttons. The buttons, of course, are not affected by whether or not the user wears gloves. 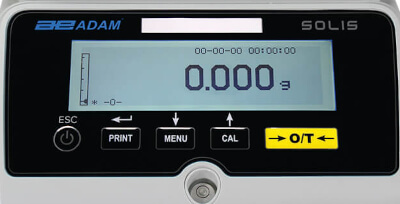 Liquid Crystal Display (or LCD) screens are the most cost-effective option and work well for many devices, including Adam’s Highland portable precision balance. They’re often backlit, which makes them easier to read under most lighting conditions.

LCD screens are much more limited in their display capabilities, with many letters and numbers formed from limited shapes. While less sophisticated-looking than a touch screen or graphic display, they’re still highly effective.

Which Type of Display is Best?

The answer, of course, is subjective and depends on your specific situation.

For more complex devices where the user has many options or functions to choose from, a touchscreen is more efficient. But touch screens won’t stand up to harsh industrial conditions, so if you need to use a balance or scale in that type of environment, a touch screen isn’t your best choice.

For simpler functions, a touch screen may be a more expensive solution than required, so an LCD could be right for you. If you’re working in an industrial environment where lighting may be harsher, a scale with an LCD (which would be easier to read under those conditions) and a sealed keypad is a better option. Learning which buttons perform which functions may take longer to learn than a quick glance at icons on a touch screen, but Adam scales and balances typically feature intuitive, color-coded keys.

Questions about which type of display screen suits your needs? Reach out to us with your questions and we’ll be happy to help!